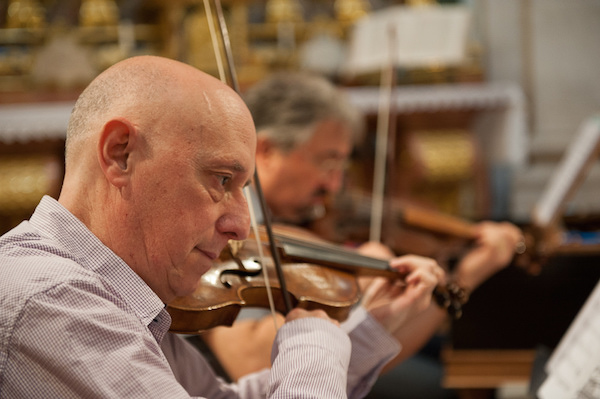 Emilio Moreno was born in Madrid,  studied music with his father   and at the Conservatorio Superior de Madrid and philosophy at university. He  won a scholarship granted by the Swiss government of Switzerland to study for a Soloist Diplom on Baroque violin at the Schola Cantorum Basiliensis (Basel) under the guidance of Jaap Schröder and went on to do postgraduate studies at the Universidad Autónoma de Barcelona where he completed his Doctorate in musicology.

He regularly plays recitals as soloist and also chamber music concerts throught the world. Moreno is concertmaster of La Real Cámara, plays principal viola in the Orchestra of the Eighteenth Century of Amsterdam and has been a guest conductor of other Baroque ensembles in  Europe,  Japan, the USA and Mexico.

Moreno was founder of the record label Glossa and is its art and is its artistic director. He is the conductor of La Real Cámara and El Concierto Español. Among his acclaimed recordings, for the labels Harmonia Mundi, Dennon, Philips, Sony and EMI, are his Boccherini Guitar Quintets playing alongside his brother José Miguel Moreno, a recording which won the Antonio Vivaldi International Award in Italy. Other outstanding awards include as conductor of El Concierto Español the CD dedicated to the chapel master of Felipe V, Francisco Corselli, a recording which won the Critics’ Special Prize in Spain; the Historical Heritage Award (2010) for his La Tirana contra Mambrú; and the FestClásica Prize (2010) and Diapason Découverte (2011) for his Iphigenia in Tauris composed by José de Nebra.

Moreno has published numerous papers and studies on Spanish early music. He teaches at the Escuela Superior de Música de Cataluña (ESMUC) where he is head of the Department of Ancient Music; he has frequently delivered courses and master classes in Spain and abroad, including in Urbino, Budapest, Helsinki, Amsterdam, St. Petersburg, The Hague, Mexico City, Brisbane, New York, Tokyo, Hong Kong, the Azores and Panama. He has also been associate professor at the Gedai University of the Arts in Tokyo.